I came across this beautiful piece of Torah from מורי ורבי, Rav Hershel Schachter שליט’’א, (c) TorahWeb 2008, and think it is well worth sharing. 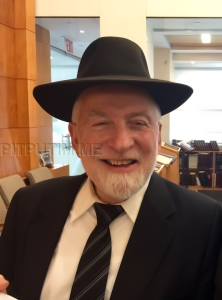 If one dies during the month of Adar in a shanah peshuta (a non-leap year which has only one Adar), when do the children observe the yahrzeit during a shana meuberes (a Jewish leap year which consists of thirteen months, two of them called Adar)? Should the yahrzeit be kept during the first Adar or the second? The Shulchan Aruch (Orach Chaim 568:3) quotes a difference of opinion on this matter. The sephardim follow the view of the Mechaber (Rav Yosef Karo) that the yahrzeit should be observed in the second month of Adar, while the Ashkenazim follow the view of the Rama (Rav Moshe Isserles) that it should be kept in the first Adar.

The presentation of this dispute in the Shulchan Aruch runs as follows: (I) the whole idea of observing a yahrzeit is a matter of minhag (custom) (II) customs are binding (rabinically) because they are considered as if the individual had taken a neder l’dvar mitzvah (a vow regarding a mitzvah) (III) when it comes to nedarim the determination of what is and is not included depends on lashon beni adam (the common language usage in the place and time of the neder) (IV) the gemara in Nedarim (63a) quotes a dispute among the Tanaim whether in common usage it is the first or the second Adar which is referred to simply as “Adar” without specifying “first Adar” or “second Adar”. The Mechaber and the Rama are arguing about which view of the Tanaim is the accepted view, i.e. do people have in mind the first or second Adar when they refer to Adar during a leap year?

We are still left with a major problem. Given that all languages change over time, just because in the days of the Tanaim in Eretz Yisroel the common usage of the term “Adar” during a leap year may have meant one or the other of the two months, perhaps over the years the usage has changed. The Meiri in his commentary to Maseches Nedraim repeats many times that the interpretations of lashon bnei adam as given by the Mishna and the Gemara only applied at that time and in that part of the world. It is quite possible that the usage of terms has changed.

The Rama concludes that one should observe the yahrzeit in a leap year during both months of Adar. We would probably understand this to be based on the Talmudic dispute regarding what is indeed the lashon bnei adam, and because of the doubt we recommend that one be machmir. However, Rav Solovetichik was fond of pointing out the explanation given by the Vilner Gaon for this position. The Gaon said the yahrzeit should be observed in both months of Adar not because of a safek (a doubt) but rather b’Toras vaday (as a certainty).

The Tanaim (Megillah 6b)had a major dispute regarding the observance of Purim during a leap year. Should the Megillah be read on the fourteenth day of the first month of Adar or of the second month of Adar. In this context the Talmud does not refer to the aforementioned dispute between the Tanaim regarding a neder. The issue of what is included in a neder is a function of lashon bnei adam, but the reading of the Megillah is a function of which day is the real Purim, which in turn depends on which month is the real Adar. The Tanaim give seemingly tangential reasons for their views of when the Megillah should be read, and don’t tackle the crux of the issue: which day is the real Purim? Therefore it would appear that both Adars are really Adar, and the fourteenth of both months is really Purim. In fact, the fifteenth of each month is also considered a day of Purim and thus a regular year has two days of Purim and a leap year has four days of Purim.

The Talmud and the Shulchan Aruch point out that it is forbidden to fast or to deliver a eulogy on any of the days of Purim, whether one lives in Jerusalem or Tel-Aviv. We leave out tachanun in a leap year on all four days of Purim. The question of when one reads the megillah is not really a question of which day is the real day of Purim, but rather on which of the four days should one observe the mistvos of Purim. Pesach is a seven day yom tov in Eretz Yisroel but one can only observe the seder on the first night. Rosh Hashana is (biblically) a twenty four hour yom tov, but the mitzvah of shofar can only be fulfilled during the day. Similarly, all four days are really Purim but one can not read the Megillah on whichever day he chooses. One tana is of the opinion that we should not postpone reading the Megillah to the second month, since we are not allowed to forgo an opportunity to do a mitzvah – ein maavirin al hamitzvos. The second tana insisted that we read the megillah on the second Purim, which is closer to Pesach, to connect the geulos of Purim and Pesach.

And now the punch-line: the observance of the yahrzeit is not purely a matter of minhag. Rather the assumption is that since a person died on this day, perhaps this day is still a day of judgment (yom hadin) for the deceased (or perhaps for his entire family)[1], and as such ought to carry with it certain observances (fasting, reciting of kaddish, learning mishnayos, etc.) in order to mitigate the din. If we assume that both months of Adar are really Adar, then both possible days of the yahrzeit may be viewed as yemei hadin, and hence the yahrzeit ought to be observed in both Adars, not merely out of doubt (meisafek) but rather as a certainty (b’Toras vaday).

[1] See Chaim Uvracha Lmishmeres Shalom on the topic of yahrzeit, #15.

2 thoughts on “Dealing with two Adars”