Les Erdi passed away a little over a week after my father, הכ’’מ.

I knew Les Erdi as a little boy in Elwood Shule, over 40 years ago. He was different. The Shule was basically made up of Polish holocaust survivors, and he was one of a handful of Hungarians. There was and remains some antipathy between Hungarian and Polish Jews. The Poilishe Yidden were essentially snobby to the Hungarians and vice versa. In Elwood, the Poles held the upper hand. They were culturally apart. Polish Jews never spoke anything but Yiddish in Shule whereas Hungarians seemed to converse in Magyaro.

The so-called “frumer Hungarians” immigrated to Melbourne and settled in Adass and Ripponlea. The founding fathers were moderate, but their grandchildren are fundamentalist charedim, and often rabidly anti-zionist. My father complained that they wouldn’t greet him in his street, let alone say Good Shabbos. Sydney, however, absorbed the “other” Hungarians, some of whom came from traditional homes, but most of whom were more remote from practical observance. On the other hand, the Sydney variety were staunchly Zionist. I know I am generalising. There are very special exceptions.

Les was somewhat like a Sydney-style Hungarian residing in Melbourne.

Les wasn’t just a typical Hungarian, though. Until the last day I spoke to him, he presented a thick and broad Hungarian accent which seemed immovable, and like Les, refused to moderate over time. Despite being a busy businessman, Les never lost that severe Magyar twang. His wife, Eva, may she live healthily until 120, also exhibits that strong accent.

I wanted to visit Les when he became rather ill, but was advised that he didn’t want visitors. You must respect the wishes of a sick man, and so I stayed away. I also understood his reasons, knowing the man. He was a powerhouse, and that’s how he wanted to be remembered. 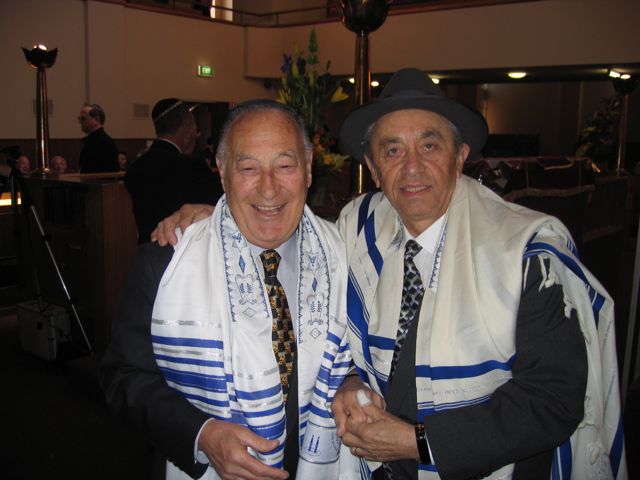 As a little boy, I used to sneak in between them. Les was always short, and it didn’t take long for even my modest height to exceed his. Eventually, I stood behind them both. Elwood Shule, a love of Rabbi Chaim Gutnick ז’ל, Chazan Avraham Adler ז’ל, Reb Chaim Yaffe ז’ל, the shared experience of being a survivor: all these elements cut a swathe through the cultural differences of Polish and Hungarian Mispallelim. Les and Dad הכ’’מ often had an arm around each other. They would joke together and there would always be a predictable joke about who should go up first to the Duchan (after Mr Blass, of course, who was always considered and called the “Cohen Goodoil”. Mr Blass passed away at the age of 99, and had all his faculties till the last day I visited him in hospital, just days before he passed away. His last words to me were “thank you, I will never forget you”.)

I was a young man, then newly married, and at that time didn’t serve as Chazan for Rosh Hashono and Yom Kippur. I was enveloped in my own davening, and would commonly daven Shmoneh Esreh on Rosh Hashono/Yom Kippur for 40 minutes or more. I was remote by nature, intentionally oblivious to the surrounding and somewhat of an intolerant “frumak”. I didn’t engage much. It could have been seen as haughtiness, but that wasn’t what it was. I recall that upon returning from learning in Yeshivah in Israel, I approached the then President, Mr Mottel Roth, and in front of others on Yom Kippur between Musaph and Mincha (much to my father’s shock and horror) asked Mr Roth how he could conceivably remain the president of an Orthodox Shule when he drove every Shabbos. I suggested Roth should resign on the spot. I was young, very black and white (perhaps more black than white), and didn’t engage my mind before my mouth.

I mellowed over time, and continue to do so. I grew to love each and every one of those “Poshei Yisroel” (“sinners”) after I came to the stark realisation that I was not ever even remotely in a position to understand their life experience. I had enjoyed a closeted, altruistic, and somewhat untroubled life full of opportunity. These Poles and Magyars eventually ceased to be Poshei Yisrael in my blinkered view. Each one of them morphed into a precious jewel, a Kadosh, a holy person. Rabbi Chaim Gutnick was right: anyone who walked into a Shule after emerging from the furnace of the Holocaust was someone about whom one should treat with awe and derive inspiration.

Over time, my sons, first Tzvi Yehuda and then Yossi, came up to Duchan with me and my father. Yossi used to stand next to his “mate” Mr Hoppe ז’ל but Tzvi Yehuda stood with me, right behind Mr Erdi and my father, הריני כפרת משכבו. Some of my more sensitive and charitable feelings rubbed off on my sons, and I’m pleased that they never developed my Charifus, and only had kind, meaningful and friendly interaction with this special brand of Jew.

Les surprised me. He would always engage in philosophical discussion. He knew I was an academic and that I was religious, and loved to lecture me that he had a unique one on one relationship with God. He felt privileged and blessed that he had survived, and wore the responsibility to proudly behave like a Mench in keeping with the (obviously traditional religious) education he had received in Hungary. Les truly believed that he had a personal and unique dialogue with God, and that any success he enjoyed was because of his partnership. His partner was God! Yet, despite these clearly religious undertones, he wasn’t what you’d call a dramatically practicing Jew.

Who can forget when Les’s loving wife Eva was seriously ill. Les was due to receive an Aliyah as Cohen on Rosh Hashono so that he could make a special Misheberach for her. Les was late. We had just put away the Torah. Panting, he ran to Rabbi Mottel Gutnick, and asked if there was a way to still make a Misheberach for Eva. Of course there was a way, and we readily obliged. Les was relieved. Despite wondering why God had hidden his countenance during the Holocaust and failed to personally interfere with the Nazi scourge, Les knew that God was now with him, and that God still had a say over his wife’s health, and not just his own business success.

We don’t need to extol Les’s incredible sense of charity. If he believed in a cause or a venture, he was there. He had deep pockets, and was acutely aware that he had to leave a legacy and make a difference.

I noticed a strange array of people at his Shloshim, and it was suddenly clear to me, that Les must have supported some of their causes. He took a micro interest in every aspect of his Tzedaka projects. He wasn’t simply an observer who wrote out a cheque for the inevitable plaque or honour. He had a keen and ongoing interest in what transpired and was achieved.

Les was a mench. I am sure this came from his home, parents and education. His desire as a survivor was to have an honest relationship with God. Les felt he has been spared, and must have been spared for good reasons.

In one of his early business ventures as a migrant, Les manufactured suits together with his then partner. Managing to lay the golden goose, Les procured an order for those suits from the coveted “Myers” company. I remember my father also gloating when he got orders from Myers. It was always seen as a major achievement: the competition was ferocious amongst the Shmatte industry. The Myers family was an older pre-war Jewish family.

Les visited the Myers store and noticed that the suits he had supplied didn’t contain the requisite component of wool that he had promised as part of the order. Les apologised to Mr Myers, and offered to replace the suits. Mr Myers responded that the suits were just fine, and that he had already sold most of the stock, and that he was sure that Les’s next batch of suits would have the correct wool content. Les argued. He was not averse to arguing. and said that he had not done the right thing, and would like to reimburse Myers for the difference. Mr Myers again dismissed Les’s entreaties, and suggested Les forget it.

Les was not one to take no for an answer—ever. Returning to his partner, Les suggested that they pay Myers the difference. Les’s partner was taken aback, arguing that the buyer was Mochel (happy to forgo the difference) and there was no good reason to pay money for “nothing”. Les did not react kindly to this suggestion and promptly dissolved the partnership, and paid Myers the outstanding amount. I’m told that Les then went on to succeed and his ex-partner languished in comparison.

Who would behave with such moral virtue? Even more: in those days, when every cent counted, as new migrants tried to rebuild their lives, who would have blamed someone for not returning the money? Les Erdi was a bastion of charity and business ethics who refused to adopt a lesser ethic, irrespective of his circumstance.

I found it difficult to engage Les meaningfully in our philosophical discussions. This was not because I was stuck for words. Rather, with Les, one couldn’t get a word in edge-wise. Furthermore, Les “just knew”—everything. He was sure that his relationship with God was something special and his job was to tell people about it, and not to ask for their comments or critique.

As a benefactor to Elwood, Les and Eva were notably giving but I think the aspect I will miss the most is that heavenly scene on Kol Nidrei night.

I customarily stand nervously and with trepidation on the middle of the Bima, ready to intone the ancient “Al Daas HaMakom”. Before that happens the elderly Cohanim are given the honour of each taking a Sefer Torah up to the said Bimah, standing on my left and right. As they got even older, I was careful to make sure that people like Les and my father הכ’’מ were always close enough so that they could lean on the Bima with their Toras, given their now waning strength. Alas, this year, neither Les nor my father will be near me in that physical sense. There will be a palpable vacuüm. I don’t want to think about it now.

Les didn’t have a good voice, but I can still hear him accompanying me to “Venislach Lechol Adass, B’Nei Yisroel” in the time-old Nusach of my teacher Chazan Adler, albeit with that distinctive Hungarian accent.