Sometimes I think that I really am living in a different world. Yet, I am generally quite comfortable around more Charedi types. That is, as long as they look at me, don’t mumble, and are happy to engage in intelligent conversation and normal social interaction.

We’ve all heard about the “Shidduch Crisis“. This is the phenomenon where:

All sorts of remedies for this malady have been proposed. I think they all miss the point. It isn’t about the Shidduch system per se. 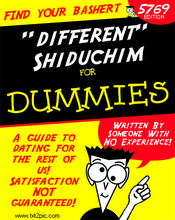 Shidduchim after all are an introduction agency. It’s a business; big business. The Shadchonim market their goods in a way that reflects the needs of their clientele, or at least they try to. They would like to see all these single and pure angelic girls married “off” (I dislike that Yinglish phrase). In the least, it means more business and perhaps a better seat in Olam Habo. Pardon my cynicism, I’ve become old(er) and more hoary. The issue is not the system, it’s the life style. It’s simply unreal and unnatural. Sure, Eliezer was sent to choose Yitzchak’s wife. Eliezer had a helping hand, and there was a good deal of Godly intervention there. I think they call it Hashgocho Protis, although today it’s become “bashert”. You can’t “fix” Charedi society with quick fixes. It’s got to be a gradual transmogrification over a generation. You see, we have too many “holy young men” who aren’t. They aren’t geniuses. They aren’t paragons of virtuosity. Many will also be ill-suited to education or leadership. They will not become “Gedolim” or even “Askonim”. They will stay back benchers, occupying the hallowed halls of Mir and Lakewood, forever and a day. They remain removed from Olam Hazeh.

They do not see the norm to be one where one earns an honest living, has set times for Torah, brings up a sound family with good values, and become a living beacon to all those who interact with them.

No, in our world, this is a second-rate existence. Forget about the Yissachar and Zevulun nexus; that is a marriage of convenience. You know, it’s B’Shaas Hadchak. The money ideally should fall from Heaven, like Manna, and each and every one of us should spend our days dissecting a R’ Chaim or a R’ Baruch Ber. Sorry guys, that situation is called Moshiach’s times. In the meanwhile, we are in Olam Hazeh, the real world.

It comes as no surprise that a new bizarre method of connecting prospective brides with grooms has been implemented, where the prospective brides get to meet an array (or should that be a gaggle) of prospective mothers-in-law. How natural is that? What a great and “unpressured” cupid pressure cooker that must have been. The green house emissions must have been sky-high. Those poor girls. What are they expected to do, show that they can make a potato-free latke in 1 minute, or bake a triple braided inside out, gluten-free and protein enriched challah, or perhaps stay awake for 8 days in a row and still smile happily when asked to change a poo nappy?

Many of the problems with society are linked to its leaders. It is they who direct the circus that this has become, and who have produced this surreal environment. Contrast this with the wise counsel of R’ Ahron Soloveichik ז’ל. A group of his holy students came to ask his advice about a wedding they had been invited to. This wedding was, shock horror, not segregated and the boys wanted to know whether they were permitted halachically to attend. R’ Ahron, in his inimical Soloveichik style of clear thinking responded with words to the effect:

What is your question? You must go! I hope they seat you on a table with nice eligible girls. This is a perfect way for you to interact with a future partner. You can talk, you can look and after that, if either of you are interested, arrangements can be made for a continuation. I would say that this is the best way. It’s in a public place, there are no questions of Yichud, and you will see each other naturally.

I can’t imagine too many Gedolim espousing such a view. R’ Ahron was no left-wing neo-orthodox type. Like all the Briskers, he was thoroughly uncompromising when it came to Halacha, and called it as he saw it.

With this background, you can read this wondrous post from Yitta Halberstam (hat tip to Talya) in the Jewish Press. The writer, a prospective mother-in-law, bemoans the fact that at the Shidduch meetings I mentioned above, the girls don’t doll up. They are plain jane, with little to no attempt to make themselves look stunning. We are even told the “moredik” story of how the Satmer Rebbe recognised that a girl with no teeth would find it hard to find a husband. Do you need the Satmer Rebbe to tell you this?

Since most of the young women at chasunas seem quite presentable, I couldn’t shake off my sense of disbelief as I looked around now. What were they thinking? How had their mothers allowed them to leave their homes with limp hair and unadorned faces? With just a little blush, eyeliner and lip-gloss, they could have gone from average to pretty. There are very few women who can’t use a little extra help. Even the most celebrated magazine models can look downright plain when stripped of all cosmetics, al achas kamah v’kamah girls who are not born with perfect features. So what was going on? Were they in denial about the qualities young men are seeking in future wives? Yes, it is somewhat disillusioning that men dedicated to full-time Torah learning possess what these girls might perceive are superficial values, but brass tacks: they want a spouse to whom they are attracted. The young men themselves might be too shy or ashamed to admit it, but their mothers won’t hesitate to ask what for some is the deal maker/deal breaker question, namely: “Is she pretty?”

Thankfully, every one’s conception of attractiveness is different; beauty is in the eyes of the beholder, and a woman’s intellect, personality and soul can have a tremendous bearing on the way in which her beauty is perceived. Still, there is trying, and then there is not trying. The mystery perplexed me: Why hadn’t some of the girls gone overboard in presenting themselves in the best possible light? I felt like shaking them in despair. As I further scanned the room (I had started assuming the role of disembodied observer once I realized that I was at the wrong event; my son is learning full time now, but plans to pursue a Ph.D so he wasn’t appropriate for this particular group), I could not help but notice the number of girls who could have vastly improved their appearances–gone from plain Jane to truly beautiful–if they simply made some effort. The truth of the matter is, I mulled, one way of looking at the story of Purim (and there are so many different prisms through which itcan be viewed) is to see it as the narrative of the tyranny of beauty ruling every society in which Man (and woman) has ever lived. Vashti incurred Ahachshverosh’s wrath because he wished to parade her beauty and she refused (bad skin day). The women of the kingdom who vied for the Queen’s throne were given twelve months to prepare for the beauty pageant – why hadn’t some of the girls at the shidduch event taken a mere half hour?

Some women who are deeply religious or intellectually inclined may delude themselves into thinking that their male counterparts will only see, appreciate and cherish their inner beauty, and that will (or should) be their overriding priority. All other surface qualities will be secondary, subordinate to the place where their neshoma stands. Truly, it is an ideal that I passionately share with them–the yearning to be seen in a soulful way, visible to the heart but not necessarily the naked eye– but unfortunately we are not living in an ideal world.

Many years ago, I had a conversation with Georgie, the internationally renowned hair stylist andsheitelmacher, who brought a certain new aesthetic to the frum world when she first launched her business. Georgie told me then that she wished she could persuade young women in shidduchim to participate in “make-over” sessions with hairstylists, cosmetologists and wardrobe consultants, who would help them achieve their best possible look. “I am often shocked by how little these girls do for themselves,” I vividly remember her saying. “How will they ever find a shidduch?”

In one sense, Yitta is right. However, these girls are just reflecting the spiritual values that deplore Olam Hazeh, and which their presumed Bashert has just as categorically rejected as part of his life aim to sit on the back bench.