To refresh memories, this unfortunate 16 year old girl was murdered because she attended a rally. It is true that the rally’s agenda was against the ethic and laws of the Torah, without any question. This is to my knowledge the position of all Orthodox Movements. I would imagine the more right-wing Conservative and Conservadox movements (such as Shira Chadasha) also share this view. Reform of course don’t believe the Torah was the word of God, dictated to Moshe, let alone the primacy of Mesora through Tannoim, Amoraim, Geonim, Rishonim and now Acharonim so it’s undoubtedly not an issue for them.

Shira Banky attended the rally to support the views of a friend. She was 16. I might not agree with Shira’s views and condemn those views with vigour, but the minute feelings translate to violence and in this case an unnecessary murder which created nothing more than more hatred for Orthodoxy, especially Ultra Orthodoxy is there anything more that Orthodox Jews can do to palpably show their distance from despicable murder which is not only against the laws of Israel, they are against the laws of the Torah. Her murderer, Mr Shlissel, is a recidivist. In my view, he should never be released and treated in a home for psychopaths. Apparently a number of Shules have performed the following to express their revulsion at murder “in the name of God”

My thanks to R’ Meir Deutsch for drawing this to my attention. Wouldn’t it be a great expression of regret if every Shule in Melbourne did the same? I call on the RCV to recommend such an action. The picture says it all. 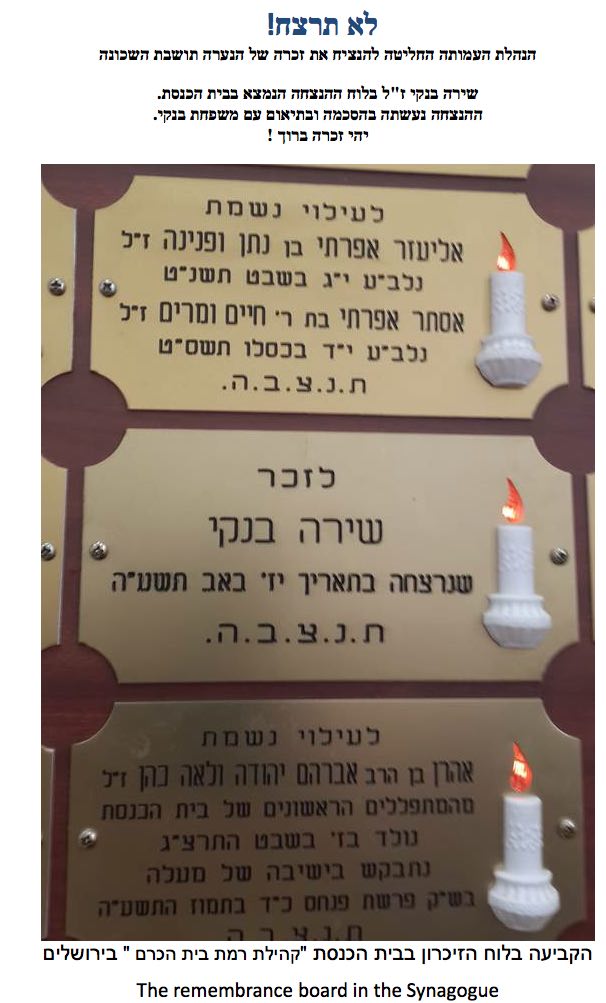