An erev Pesach entertainment event in Jerusalem’s Arena Stadium that was to include Mordechai Ben-David has been canceled. According to a Kikar Shabbos News report, the cancellation follows the intervention of the “Vaad Mishmeres Kodesh & Chinuch”.

The entertainment event “Kumzing – By the Minagnim Orchestra” – was for men only, sponsored in part by the Jerusalem Municipality and was scheduled for Monday evening, 10 Nissan. The chairman of the vaad, Rabbi Mordechai Blau, announced on Sunday, 24 Adar-II that the committee opposes the event which if held, will be going on against the wishes of gedolei yisrael shlita.

Kikar reports as a result of the vaad’s announcement, the event is being canceled.

Rabbi Blau says that the Vaad takes issue with these shows since “gedolei yisrael oppose them”.

No names of any Gedolei Yisroel were named.

Unless there is something disgusting about this concern that I’m not aware of, the biggest enemy we face in our midst are not so much the Rabbonim Muvhakim, but rather the Askant, the Askonim (machars/political apparatchiks), who want to control lives whether it’s in keeping with Torah or indeed their Rav HaMuvhak.

I’m reminded by the admission of Rav Tzvi Pesach Frank who related a discussion with Rav Chaim Sonnenfeld.  I will leave out the juicy bits but you can read them here

About six weeks ago, I spoke with Rav Chaim Sonnenfeld, and at one point, I asked him if it is right that he signs himself as the Rav of the Ashkenazim in our Holy City… He answered me that the truth is, he does not sign so, but they made for him a stamp and wrote this on it.

I love this picture (edited by me to look clearer, I don’t know where I got it from), because it represents the truth. Not the world of falsehood that has enveloped our enclaves and askonim. Rav Kook (in the spodik) sitting next to Rav Sonnenfeld. The two behaved properly to each other, even though Rav Sonnenfeld was older and more prone to manipulation by the Hungarian political incursion into Yerusholyaim described by Rav Tzvi Pesach Frank. 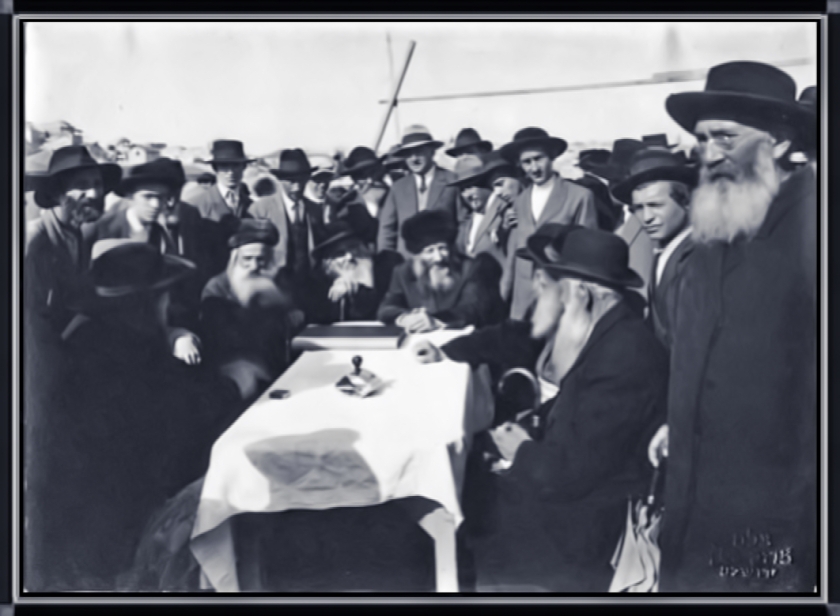