I’m sure many of us are spending time defending Israel and its rightful inhabitants at work, in forums, in comments on various newspapers (I had a totally benign comment of mine censored by the Economist, no less)

These are TOUGH times. Jewish soccer players get attacked on the pitch. We read that a shop in Belgium hung a large sign saying ‘no entry to Zionists or dogs’ and then had Zionists replaced by the word Jews. Our people fight those who want to annihilate us every minute and protect Jewish lives. Is it Torah that doesn’t see a missile on Bnei Brak or is it the Enemy themselves who perceive such enclaves as their friends?

Many in Europe of all places are facing violence and huge barrages of protest which invariably link us to hitler Yimach Shemo Vezichro. There is a very clear approach being taken by haters of Jews.

This morning someone sent me a phone picture of a demonstration in Paris taken by a bystander. I don’t have words to describe how sick in the guts I felt seeing these low lives joining those who would be happy to see us wiped out.

I am thinking that we need a web page, a World-Wide page, of faces and names. Anyone from any country in the world who joins these protests, is made visible in their anti israel views and should be named alongside their picture.

Here is the picture that raised my blood pressure significantly. 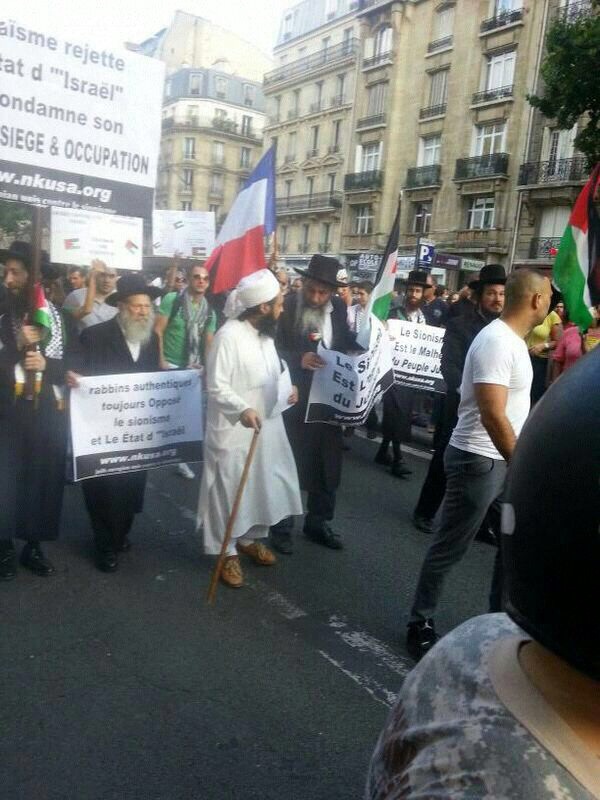 I have argued Israel’s case strenuously in a number of internet forums during the current operation  to defend Israel from Hamas. It was incredible, that my Muslim interlocutors kept publishing videos of Mr Moshe Ber Beck showing me that even Jews are against Israel.

Oh yes, I can tell them that the disgraceful Beck is generally described as a fringe lunatic, but do you think they believe me? They point out that all the ones with long side locks and funny hats and beards are just like Moshe Ber Beck, and there are plenty of them.

I’m embarrassed that someone like Beck (whose voice sounds eerily but unsurprisingly similar to his Melbourne brother) can’t keep his mouth shut and hide in a deep hole somewhere in the Antarctica or Siberia. Perhaps he and his like-minded ilk should find the same hole that the two assassins used to murder the three boys הי’’ד are hiding in: Beck and Co are just one moral rung down from them.

I’d expect to see posters all over Israel, especially Meah Shearim condemning Beck, but the Mashiach will be here before that happens.