This phrase appears in Tanach, Mishlei (14:28). שלמה המלך notes that the quality of a מצווה is enhanced when that מצווה is performed in the context of a bigger group of people. The commentary מצודת דוד supports this plain understanding, which is also the simple meaning implied in the גמרא Pesachim 64B.

What are the parameters of this phrase? What is bigger? Is three enough? ten? As many as possible? Is such a larger participatory group to be understood as a הידור מצווה, a better way to do a מצווה or is it intrinsic to the required quality of said מצווה to the extent that it is required. For example—and this example motivated this essay—assume a person is davening in a Shule which has twenty people for Maariv. Of those twenty people, two are חיובים (such as one may be a mourner in the 11 months and the other may have Yohr Tzeit on that night). Assume that both have a custom to lead the davening and say קדיש. There is now a choice:

Assuming the interpretation that בְּרָב עָם הַדְרַת מֶלֶךְ is a הידור מצווה one may rationalise splitting the מנין on the grounds that a person affects a הידור only once the fundamental מצווה has been established. Given that two people consider it their fundamental need to lead the davening (because they wish to give נחת to the נפטר so that they will have an עלית נשמה), perhaps one could argue that every group of two additional people who may subsequently arrive, ought to be split evenly between the two מנינים, so that each has ‘maximised’ its size vis-à-vis בְּרָב עָם. The other approach, which perhaps sits a little easier?, is that a-priori, when one has a מצווה to fulfill, one should do that מצווה with as many people as possible לכתחילה. Of course, if there aren’t many people then the basic מצווה is still achieved. Its beauty, however, is enhanced, like the beauty of an אתרוג, when it is possible to meet the “A grade” version of the מצווה through a bigger crowd or participation.

Consider this example. The Midrash (תורת כהנים (9:2 describes the process of קמיצה, where the כהן takes some fine flour for the קרבן מנחה and with three of his fingers holds onto a blob of flour, while the top and bottom fingers (index and pinky) are used to ‘smooth off’ any protruding flour. In that process, it is possible that the one כהן performs all the actions of קמיצה.  That  כהן happens to be on scheduled guard duty. There are, however, other כהנים who potentially can help. Consequently, the Midrash quotes בְּרָב עָם הַדְרַת מֶלֶךְ and suggests that each step of the process be performed by a different כהן, and in this way, since more people are involved in the real מצווה of קמיצה, God’s majesty is enhanced. (One כהן passes the flour, another holds the special vessel and another performs the rounding off the flour. Alternatively, where oil is mixed with the flour, one measures, another kneads with the oil, and the third rounds off the flour, see (תוספות ר’’ש משאנץ שם). The Midrash derives this approach from the פסוק which states והביאה אל בני אהרן הכהנים. The plural indicates a Torah preference for more people to be involved.

The plural is used to increase the number involved in the מצווה. It seems that the preference to have more people involved in a מצווה is more than a qualitative improvement. Since the תורה explicitly advises that more כהנים are required, we might learn from this that in all cases “the more the merrier” is a fundamental aspect of the מצווה. On the other hand, one could argue the opposite. The תורה had to tell us to use more כהנים here (as per גמרא Menachos 7a) because בְּרָב עָם on its own, is not an imperative in general, but rather a better way to do things.

An example involving the sprinkling of the blood: the משנה in Pesachim (5:6) states explicitly that once the blood of a קרבן was collected and passed from one כהן to another, this is performed through a chain of Cohanim until the last Cohen nearest to the מזבח performs the זריקה sprinkling. The גמרא Pesachim 64B states that the reason many כהנים are involved is to make sure as many people are taking part in the מצווה as per the פסוק of בְּרָב עָם הַדְרַת מֶלֶךְ .

Indeed the אור זרוע: קטח is of the view that for every מצווה that can be broken up into parts (eg תפילה בציבור) it is better if partial honours are undertaken by different people, as opposed to one person doing all the davening, layning, and then saying haftora. 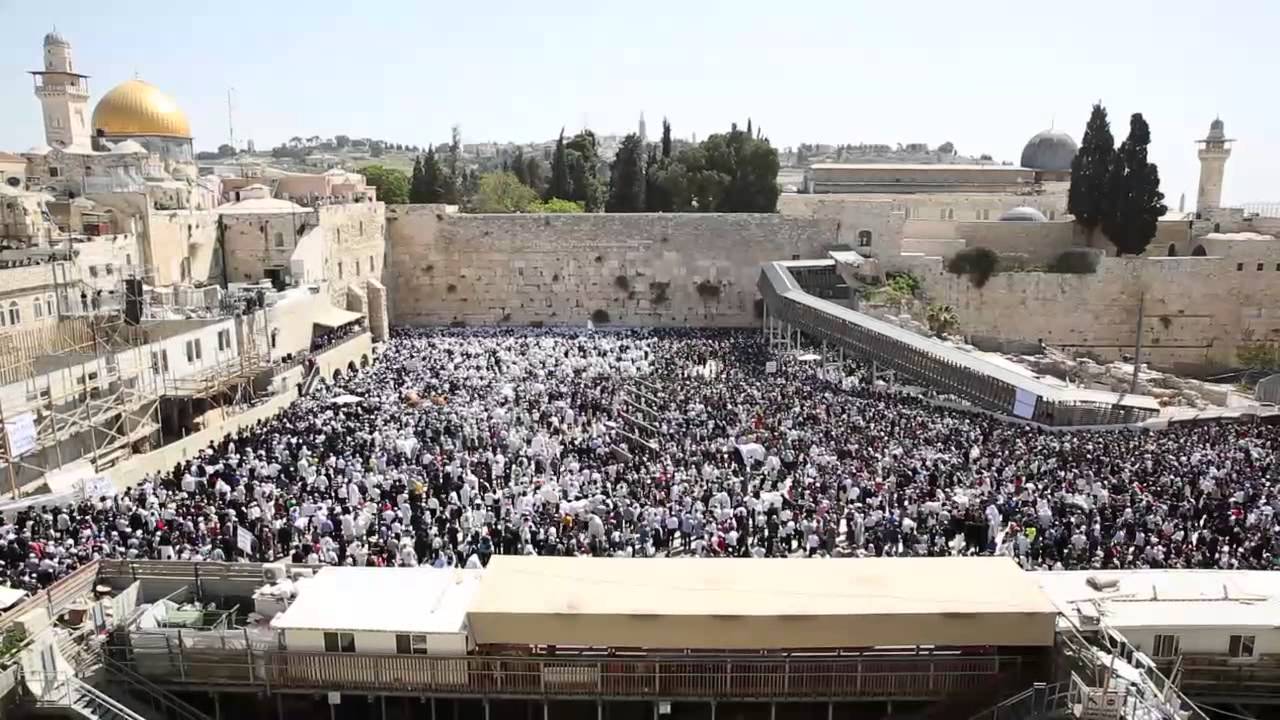 Another example is brought by the רמב’’ם in (הלכות בכורים (4:16, where the רמב’’ם notes that as the farmers approach ירושלים to present their first fruits, they pause and gather together in the central town of the regional area and then march en masse in the morning to ירושלים עיר הקודש to offer their first fruits. Why don’t they go up in the order that they happen to arrive? Why do they gather in a central town first and arrive in a block? The רמב’’ם explicitly states that it is required that they come as a larger block and not as individuals. Again, we see the importance of involving a crowd in the performance of a מצווה. One might argue that the רמב’’ם needed to tell us this law because we would not have done so in a large group otherwise. Alternatively, one could argue that בְּרָב עָם is always a requirement. However, sometimes we are directed in the method through which many people can indeed be involved.

An unrelated but similarly qualitative approach to a מצווה is the concept of זריזים מקדימין למצוות—those who are punctilious observe a מצווה at the earliest opportunity. A well-known example is that of ברית מילה which is done first thing in the morning, even though it might be easier for people wishing to attend an accompanying סעודה to have the ברית in the evening. We learn this from אברהם אבינו and וישכם אברהם בבקר.

What do we do when זריזים מקדימין למצוות clashes with בְּרָב עָם? For example, if there is a small crowd on time for מעריב during the week, should they wait a little longer as there would certainly be a bigger מנין? On the other hand, since the gazetted time has been reached and there is a מנין there is excitement to daven מעריב (yes I know it’s a רשות) so perhaps one should Daven immediately at the first opportunity. The חיי אדם in  הלכות זהירות מצווה 58:7 states that זריזים מקדימין למצוות has preference over בְּרָב עָם based on the גמרא Rosh Hashana 32B.  The גמרא asks about the place for the saying of הלל in שחרית. If we do so at the first opportunity then it is immediately after שחרית, and is an example of זריזים מקדימים. On the other hand we could have delayed הלל  to מוסף where there would be more people and בְּרָב עָם. We see from this משנה and גמרא that we prefer זריזים over בְּרָב עָם.

Another example of בְּרָב עָם occurs when one wishes to bless the Moon after ראש חדש. We know that one is able to do so until the 10th of the month. Imagine it is day 8, and one observes a clear moon. In such a case a person is able to say the blessing over the moon without any crowd, on his own. Should he wait until מוצאי שבת that is approaching where, if the moon is visible, there will be a nice crowd of people => בְּרָב עָם הַדְרַת מֶלֶךְ saying it together? The ביאור הלכה on הלכות ראש חדש ס’ תכו:ב states explicitly that לכתחילה, in the first instance, it is better to say it בְּרָב עָם. In other words, wait until מוצאי שבת (if it is before the 10th) and do away with זריזים מקדימים!

One more example is in the שולחן ערוך Orach Chaim (90:9) where the מחבר recommends that a person should try to daven with a מנין in Shule. The משנה ברורה 28 (ibid) notes that if one has two Shules nearby and one Shule has a bigger מנין, and otherwise both מנינים are decorous, then one should daven in the מנין that has the bigger crowd because of בְּרָב עָם. (This also finds its way in Halacha where people make Minyanim in their houses, say, on Friday Night instead of davening in a nearby Shule. One should ask their Local Orthodox Rabbi. From where I stand, it would appear to be a practice that is contraindicated according to Halacha. This is also similar to layning the Megilla privately when it could be done בְּרָב עָם at Shule)

I have not in any way exhausted the different considerations with respect to this notion. The topic certainly isn’t done justice by this short essay. That being said, let us now return to the example mentioned initially:

where there are twenty people and two are חיובים, and as a result the twenty is split into two מנינים of ten, should one split the מנין or is it better to split the service itself where possible between two חזנים!

It could be argued that the חיובים of a mourner are not a true Halachic imperative. Rather, they are מנהגים that have been adopted with the single aim of giving נחת to the departed, so that the נפטר will attain an עלית נשמה. Accordingly, if the מנין is split, and there is (apparently) no הדרת מלך, we need to ask ourselves if in fact the נפטר would draw נחת from an act which ignores the הדרת מלך of הקב”ה and creates small adjacent minyanim?

There is an interesting text in גמרא Succa 51B. The Gemora describes an enormous Basilica Synagogue in Alexandria, Egypt, which could hold six hundred thousand people, or even twice that. That number may be an exaggeration; I don’t know. Either way, the Synagogue held very many people to the extent that there was no way to actually hear the חזן and know when to answer the חזן’s קדיש. The solution to this problem was to use flags, which acted as a semaphore, so that the people knew when to say אמן. A raised flag might have meant “time to say אמן”. Mori V’Rabbi Rav Hershel Schachter שליט”א informed me of the פירוש of the חיד”א in his פתח עינים on עין יעקב, in reference to that גמרא in Succa 51B. The חיד”א asks a good question. Surely, if there were so many people in that Alexandrian Basilica Shule, the solution to the problem of the חזן being inaccessible would be to split the מנינים into smaller parts such that each חזן was heard and there would be no need for flags. I don’t know how that would work logistically, but it’s certainly a logical approach to ameliorating the problem. Answers the חיד”א, this solution was not permitted, that is, they were not permitted to split the large מנין. Why? Because a large מנין personified the majesty of a great and large crowd, all davening at the same time. That is, it would have been prohibited to split given בְּרָב עָם הַדְרַת מֶלֶךְ!

Whatever the case, it is somewhat difficult to understand why some split מנינים. This is especially so when one can hear parts of the davening from a split מנין that is within ear shot.

After I finished this essay, I came across a talk from Dayan Osher Weiss on this topic. If your hebrew is reasonable, you should be able to understand. (At the time of writing, I haven’t yet listened to the Shiur). I also found that the נטאי גבריאל brings two Responsa which give permission to split the minyan. Alas, I haven’t yet looked into these via hebrewbooks.org)