There is a moving Breslov melody which is very popular. The words are from R’ Nachman in לקוטי מוהרן although I haven’t ever read that ספר חסידות, but so I am told. The gist of it is that even when God is hidden, as in ואנכי הסתר אסתיר את פני he is still there albeit בהסתרה.

My davening was very agitated at Shule today. In fact, during davening, when I read certain things, tears welled up in my eyes, and for reasons which probably aren’t entirely normal, I didn’t want anyone to notice my distress. I raised my voice for pesukim which condemned רשעים.

I asked a few people, what is the meaning of this song after the tragedy the latest tragedy. Rav Moshe Twersky הי’’ד for example, Rosh Yeshiva, was named after R’ Chaim Brisker’s elder son Rabbi Moshe Soloveitchik, the Rav’s father, whose Yohr Tzeit falls out on the same day as my father ע’’ה.

I asked others whether Breslav would be bopping in the streets of Beit Shemesh. How can anyone, even a Chossid bring שמחה to the table.

I noted to others, that in this case, they don’t do Tahara, and one is buried in their bloodied clothing. I don’t know what the din is, but my feeling was it would have been appropriate to bury the person in their Tefillin as well as their Tallis. אפילו בהסתרה was sounding so hollow to me. I couldn’t cope with it.

Here is a post from a lady close by

Some people wake up in the morning to the soft strains of the music on their alarm clock. This morning I woke up to the heart-stopping shrieks of multiple ambulances and police cars racing down my street on the way to Har Nof. Meanwhile my husband was in shule davening Shacharis. I hadn’t even said goodbye to him as he left while I was still asleep and was considerate enough not to wake me. Thank G-d my husband came home from shule. But my friends Chaya Levine and Breina Goldberg weren’t as fortunate. What do you say to a friend, the widow of a holy martyr, whose life has changed drastically in an instant? How can I smile at Salim, the friendly Arab worker at the grocery store across the road, without feeling suspicious? And how do I deal with the fact that for the first time in 24 years in Israel I no longer feel safe in my own backyard? May G-d comfort all of us in these trying times, and may we all appreciate every minute spent with our loved ones.

I just don’t want to hear God’s accountants telling us it is because of a) or b) or c). Do yourselves a favour and adopt וידום אהרון.

At times like these, I’m terribly reminded of horrible holocaust scenes . I’m left with extreme בהלה

What can one do? We can donate money to relevant organisations, but there are families that now comprise some 24 children without a father. What was the Aybishter doing hiding? Can we ask why? I say yes. I say we adopt Moshe Rabeinu’s attitude and say מחיני נא מספרך rub me out from your Torah if you have something against the Jews. This so soon after a Shabbos Kiddush Hashem, it defies logic, and yes, I know “that soul may have completed its purpose in this world” is often used, but I don’t know why that soul wasn’t allowed to complete more. Who does it harm?

Don’t anyone dare suggest it was because we didn’t follow Satmar’s incorrect views.

In Melbourne we have the wonderful CSG looking after Shules and Schools. Ironically, they don’t look after Chareidim who think that their negative attitude to Israel and Torah Learning etc will protect them. This is a reminder that אין סומכין על הנס and you have to protect yourself. Does someone really believe that two or three deranged chevra from this כת הרוצחים these ישמאלים ממזרים aren’t capable of a copy cat style operation. Both major political parties are supportive of improved security, but there is a limit to what can be done. And I hope nobody touches the latently anti-semitic, nevus socialist alliance party. Don’t give them one vote.

Parents, watch your kids. Watch yourselves.  I see kids in the Charedi area of Ripponlea walking at night alone or in two’s. They wouldn’t have a hope of protecting themselves from the type of attack that Zac Gomo endured. Zac was a חייל with training and that saved him. He spoke Arabic and knew how to close a wind pipe.

Maybe we need to introduce קרב מגע in every Jewish School. Obama isn’t going to help us, and neither is anyone else. We can’t be sanguine. We must act, speak up, and look after ourselves. At the same time, improving one’s own personal faults in עבודת השם and עבודת הזולת, which is a very personal thing, should be on everyone’s mind. The world is finely balanced, and as usual, we are on the עקידה and although it is commonly thought that Yitzchak didn’t die on the עקידה the Midrash/Peskikta explicitly says that פרחה נשמתו i.e. Yitzchok died before the knife cut, and when he was saved, a new Yitzchok was effectively born.

אני הקטן don’t have anything of real value to contribute in this blog post except an outpouring of = extreme angst and aggravation that MY God was אפילו בהסתרה and if so, I say, no I beseech, that this game of hide and seek needs to stop through full גילוי אלוקות במהרה בימינו.

In the meanwhile, I would, even though it’s against intrernational law, not only demolish the houses, but evict all members of the family on a one way passage to Gaza. Let them rot there. I would investigate and include any Imam/Sheik who had influenced them (if they did) and do the same to them. The Balad party and all parties should swear allegiance to a JEWISH State, and if they can’t, they should leave to an Arab state.

I am heart broken to read of the murder of the three boys. Apart from Nikmas Dam Avodecho, We need to add 10 minutes of Mishnayos learning per day for each of them. 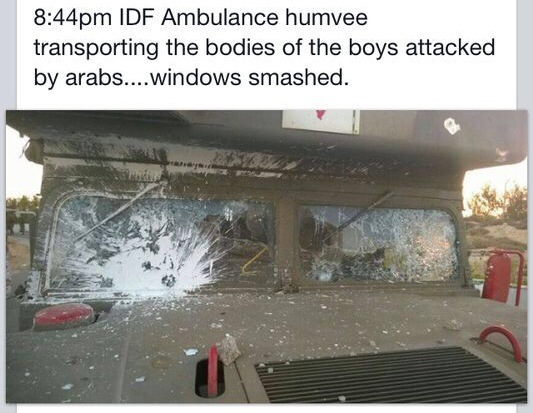