It is well-known that the Lubavitcher Rebbe, זכותו יגן עלינו, liked this drink and had it on his table for the tish. It is also well-known that it (once) had some Xtian cross emblazoned and supposedly someone mentioned that there might be a wine (סתם יינם) issue with the drink. I am told the drink suddenly disappeared from the Tish where the Lubavitcher Rebbe used to farbreng. The reason it disappeared was explained later by the Rebbe himself “due to those מרה שחורה’ניקעס (party poopers) who have cast aspersions on it”. I am not going to pretend that I understand why that bothered the Lubavitcher Rebbe, and I won’t second guess him.

The Chicago Rabbinic Council do lots of investigating of spirits and liqueurs as does the London Beth Din. If Chicago pronounces that something is not recommended, other respectable agencies follow their finding. (I don’t include the private little (not to be trusted) Kashrus agencies where the person giving the hechsher is also paying himself a tidy wage). Proper authorities, like Kosher Australia, cRc, OU and a host of other respectable agencies still do not recommend Bénédictine.

On the right is what the 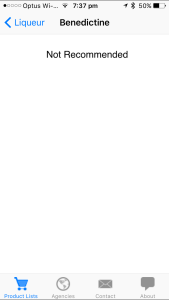 Now, I read an essay from the cRc about Bénédictine here and apart from Rabbi Moshe Gutnick’s view (which was not based on visiting the premises) it seemed they were having it a “bit both ways”. Moshe is one of Mordechai’s younger brothers and oversees a large Kashrus organisation in Sydney for many years.

I am not a lover of liqueurs in particular, but I thought that something just wasn’t right. Were the Dominican Monks not allowing any agency in? That seems incorrect. If so, why hadn’t any of the European agencies gone in and investigated it properly. Why hadn’t the Lubavitchers investigated? Were they afraid it might be forbidden? I sent an email to the cRc and copied it to Rabbi Gutnick where I wrote

Hi
I read the article on this
http://www.crcweb.org/kosher_articles/Benedictine.php
and do not understand why R Msika doesn’t drink non B&B.
Is this because of the cRc comments or is it because he only drinks Mehadrin with a Mashgiach at least Yotze VeNichnas, is it political, or a personal Chumra.
Does the Beth Din of America accept it?
In Melbourne it is not recommended
I have never had it
I am not a Lubavitcher
My Posek is Rav Schachter

They didn’t answer my email or it is still flying in the ether or ended up in their spam. I decided to be “clever” and emailed the head of kashrus of the cRc in Europe. Let’s just say that his last email to me was a tad bizarre and didn’t shed any light on the issue even though the responsibility fell on his shoulders.
In the meanwhile, I couldn’t understand Lubavitchers who drank it with wanton abandon. I wondered how they could be confident the recipe hadn’t changed even if it was Kosher once. I had also been in touch with the Israel Rabbinate’s expert on spirits and he emailed me that some was kosher according to Rav Lande of Bnei Brak and others were not.
I’d had enough of the mirky issue, so on a whim, I emailed one of the heads of Rav Lande of Bnei Brak’s Kashrus division. I knew him from Melbourne where he resided once and went to the same school as me. He is Rabbi Motty HaSofer. Motty was nice enough to respond immediately. He had investigated it personally several times and explained that the product was 100% Kosher.
Which product?
Well, in the picture below you will see 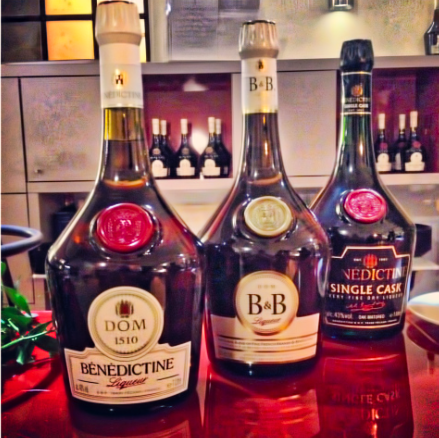 from right to left, their cask liqueur. It is Kosher. The one in the middle which has B&B on it is 100% NOT Kosher. They add Brandy hence the B&B. Then there is the common one on the far left with the word DOM which is their regular liqueur. It is 100% Kosher. So you are wondering what about the bottling and the Brandy (wine) from the “B&B” version as it is all made in one factory? Rabbi Hasofer informed me that

All are bottled in the same bottling machine, but there is a full
cleaning cycle between each product bottled.

He also told me that Rav Lande himself served the product at his own Simchos! Now, every one trusts Rav Lande’s Hechsher as far as I know, in the same way that they trusted his father’s hechsher.
In summary, the major Kashrus agencies have it WRONG. You can drink two of three Benedictines, as above; not because the Lubavitcher Rebbe drank it decades ago, but because it is known now to be checked like anything else and is Kosher. End of Story.
I suggest that Kosher Australia inform the cRc to change their determination. I will send the email I received. What I can’t understand is why could I do it, and they couldn’t/didn’t?

6 thoughts on “On the Kashrus of Bénédictine Liqueur”